Is tecar just a placebo effect? It’s a discussed topic and some people wonder if the beneficial effects reported in clinical practice are due to technology or to the placebo effect.

INTRODUCTION TO THE CONCEPT OF TECAR

“The (capacitive and resistive energy transfer) is an endogenous thermotherapy that uses electrical currents, induced by a 448kHz capacitive/resistive mono- polar radiofrequency, to generate the warming up of deep tissues.”(2*)

In general, this technology is associated with the effects of electromagnetic fields around 0.5 Mhz on the human body. Since the early 2000s, dozens of studies have been published in impact factor journals that highlight how this type of technology is capable of generating effects that are NOT attributable to the placebo effect .

The effects most commonly associated with this technology are: increase in blood perfusion, vasodilation, drainage, increase in temperature and cell proliferation of functional cells. 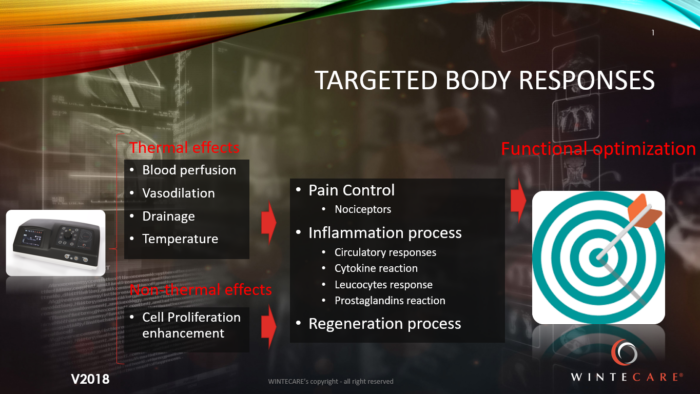 There are thousands of publications about this phenomenon. In a nutshell, the placebo expresses the beneficial effects that a patient perceives following a therapy and that are related to their psychological reaction to it.

These are effects that are not attributable to specific therapy but to the fact that a person feels better when someone treats them in general.

Since this is a positive effect, it is sometimes studied how to encourage “placebo” in patients under therapy, as it is capable of increasing the benefits of many types of treatment.

In this field of study, however, when you want to distinguish this effect from those really related to therapy, “placebo” is a problem to manage and isolate.

The “randomized double blind” scientific method has this objective. There are precise rules to follow to implement it but, in essence, we select the patients to be treated and divide them randomly (relying on chance) into two groups. Having verified that there are no significant statistical differences between the two groups, the first undergoes real therapy and the other is administered a fictitious therapy in ways that do not allow the patient to understand which group they actually belong to. To minimize the risk of “contaminating” the data, even the people who administer the therapy should not be able to understand which therapy (real or fictitious) they are applying.

When studying the biological effects of a treatment such as hormonal variations, blood flow, oxygenation… it is possible to apply this method also as a variant: the same group of patients is used at different times to measure the effects of real therapy compared to the effects of administration of fictitious therapy. If the difference between the real and the control group (placebo) is statistically significant, it is concluded that the therapy has placebo independent effects.

In addition to the clinical results, one of the fundamental questions we asked ourselves was to prove that the tecar technology was actually able to generate increases in blood perfusion and that these effects were not related to placebo. Furthermore, it was important to demonstrate that it was not only a superficial effect, but that it was a profound effect capable of affecting the muscular belly. Thanks to the research, it has been possible to highlight that the stimulated effects persist for some time even after application.

For this reason, a specific study was completed using a WINTECARE T-Plus tecar instrument comparing the placebo effect with the real effect of the device on peripheral, deep and superficial blood perfusion.

IS TECAR JUST A PLACEBO EFFECT? A LOT OF STUDIES SHOW A NEGATIVE ANSWER

There are other studies that can be found on PUBMED concerning the effects generated and measured through a 0.5 Mhz tecar instrument. Here are some recent ones:

For a broader overview you can access our annual report.

All you need to do is fill in the form at the bottom of this page in all its fields.

Any cookies that may not be particularly necessary for the website to function and is used specifically to collect user personal data via analytics, ads, other embedded contents are termed as non-necessary cookies. It is mandatory to procure user consent prior to running these cookies on your website.